Cashing Out Of Vancouver Real Estate: 43 Homeowners List On The Same Street 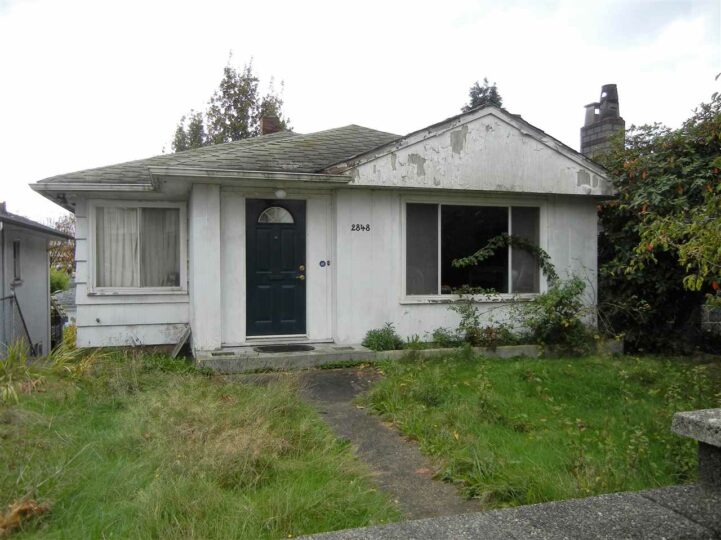 Over the past few days, a number of homes have begun listing – all in the same area of Vancouver. The curious move now makes a little more sense, real estate agents have convinced 43 homeowners on the same street to list their homes for sale. The deal is being pitched as land assemblies, for a developer to buy multiple strips of land in the area. The buyer will likely need to be deep-pocketed, and politically connected, however – there’s an up to 80% premium on the land, and it’ll need to be rezoned to likely make a profit.

The prime strips of land are on East Broadway, between Nanaimo Street and Rupert Street. Multiple agents and brokerages are involved in the deal and are hoping the sellers hold out for a developer. They’re all priced in the $2 million to $3.3 million range, just a tad over the assessed value.

The plot of land east of Kaslo on East Broadway is one of the more readily available pieces of land for sale. 11 of the 13 homes on the strip are currently listed for sale, but it’s unclear if the other 2 are scheduled to go on sale. The homes vary in size and style, but they all went with a $3.3 million price tag. All 13 homes have a combined assessment value just over $20 million, but the 11 listed have a combined ask $36 million. That’s an 80% premium in case you were just going to do the math.

The agents are targeting a deep-pocketed buyer, and not just because of the premium on the property. Re-zoning restrictions will likely prevent the developer from just building a luxury condo. As the city densifies, the rules will likely evolve going forward. So the potential buyer will have to wait out the city’s current rules. How long that will take is anyone’s guess, but carrying the property in the meantime won’t be cheap.

A deal of this size will likely take a while since the cost and ability to zone it will take some homework. It will be an interesting benchmark for  Vancouver real estate, however. Land’s only worth what someone is willing to pay for it, so if a developer thinks there’s a little more steam in redeveloping single-family detached homes, there might be a few more speculators that jump into the market.